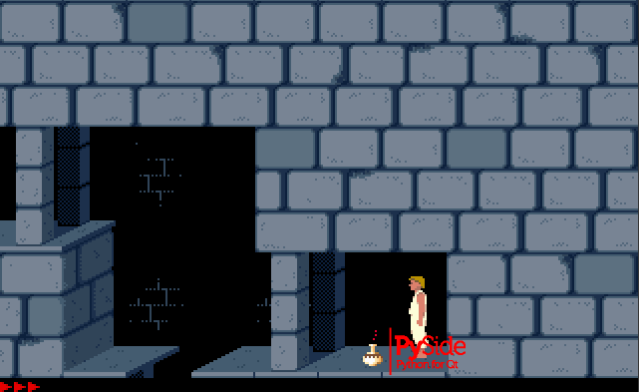 Last week PySide was launched, the team was glad to see the project finally go public and receive the community feedback, be it positive, negative or both. Many questions arose, like “Why duplicate efforts?” Well, I can’t say much more than what is already answered on PySide FAQ. For us (the team) the fact is that we had a task to accomplish and must perform it the best we can. That said, allow me to remind you that this is my personal blog and many of the views here written are my very own cherished opinion.

The other question that we’re waiting for, and my personal favorite, was “Why Boost.Python?”. Though one. First of all, Boost.Python eases very much the creation of C++ libraries bindings for Python. How to infer which method signature to call based on the Python arguments passed to the method wrapper? Boost.Python will take care of it. Inheritance? Type conversion (in opposition to type wrapping)? You bet: Boost.Python will take care of all this for you. The feature full Boost.Python gave us a great kick start and at first we progressed very fast. Occasionally some strange bug appeared and took some time to figure out the problem through the jungle of template error messages. Part of the job anyhow, and after that: fast pace again.

At some point somebody checked the size of the produced binary modules. “Hey guys, is that correct?”, “Ah, just strip the file.”, “Still huge.”, “Holy cow…”. Next task: size reduction. Some redesigns reduced a good deal of megabytes, g++ flags were also helpful, but these things weren’t enough. Then a new idea: “Let’s try it with the Intel C++ compiler and see what gives.” It gave binary modules with feasible sizes. Good, but the test just proved that it was possible to achieve the reductions. Besides, there were still other new ideas to try, and the fact that as soon as the project was launched the community would step in and say “I had this size problem with Boost.Python before. Here is how I solved it…”. (Which reminds me how limited, communication wise, a project is in its non-open phase. And don’t point your finger, mister — for every open source project has it’s non-open phase, even in your head!)

Part of the team was growing skeptical about the size reduction problem. Why not to try CPython code generation right now? Well, some say you can’t change the plane’s motor while flying, and this is true. Feature wise we were almost there and the reduction was possible. Also some of us had mixed feelings about CPython. In a past project a comparison was made about writing bindings with different technologies, including CPython, to check for speed, size and the burden imposed on the developer. At the end the guy with CPython had good numbers (not stunningly better than the others, at least for the case that mattered back then), but his personal impression was that he was suffering the Stockholm syndrome: he knew CPython abused him, but he developed a bond with his kidnapper.

Still, almost every one started personal (and voluntary, aka “made at home”) experimentation with different CPython generators (even a ctypes one!), and in the end all the ideas (including the ones from the Boost.Python generator) were merged into a single CPython generator, called Shiboken.

Before going on with this, allow me to explain that Shiboken means absolutely nothing. Not buddhist void, I just mean that the word Shiboken has no meaning attached to it. Except, of course, “generator of CPython based binding code for C/C++ libraries”.

Disclaimer: I don’t know a thing about Japanese language and the above kanjis are just something that I found at wikitionary to match the sounds of Shiboken. Forgive me, Lauro. 🙂

The conspirators’ plan was to develop the alternative generator to a point that could generate PySide bindings that pass all our unit tests, run the apps, etc, thus beign able to replace the Boost.Python front-end. For PySide users, i.e. Python programmers, the replacement would bring no impact, since the API should remain the same. The Shiboken generator is based on the same principles of the Boost.Python one: built using the API Extractor library, how the C++ library should be exported to Python is described on a Type System file, and so on.

When Shiboken reached a point that we’d think was good enough to start working with it at work, we presented it to our bosses and the green light was given. The Boost.Python generator will continue as the tool to generate the official PySide bindings, but with the parallel efforts we hope that Shiboken takes its place, the size reduction is achieved, and the Occam’s razor cut off the unnecessary entities. 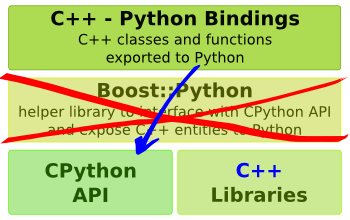 Another fix that we aim to achieve with Shiboken is to allow non-Qt C++ and C libraries to be wrapped with the generator scheme. The problem with the current Boost.Python generator is that even a non-Qt library wrapped with it will depend on Qt. Of course this is not the best we can do, but the fixing task had low priority since the PySide bindings are the main target of the work. For Shiboken we make it library agnostic from the start, specially because we do not get our chances trying to wrap the whole Qt from start: a test library with all the problems that could arise was made and is the source of all Shiboken unit tests.

Abandoning Boost.Python means abandoning some features already provided by it. One that is worth mentioning is the decision of which signature of a method should be called depending on the Python arguments passed on the call. For this to work we have to write a decisor that progressively checks the argument types until the correct signature is found. Just this? Of course not, the binding developer can use the Type System description to remove method signatures, remove/change the type of its arguments, even remove/change/set its default values! The method call decisor must take everything into account.

Debugging a multiple signature method call decisor is easier with the "dumpGraph" method.

No Boost.Python also means that would be harder to convert types and containers back and forth between C++ and Python. The template specialization technique was used to solve this one.

Why not generating “pyobj == Py_True” directly, you say? The above code scales better, since it will be the same for types that are composed of some primitive types inside containers inside containers, etc. Besides, the compiler could be counted on to inline short methods.

“They have a plan”

Right now Hugo (from PySide fame) started working on generating bare QtCore bindings without QObject and signals, then go to QObject. After that we should solve the signals problem, re-write the pieces of custom code and so on. I think after QtCore is completely done we can make a comparison with the one produced by the Boost.Python generator and see if the whole Shiboken idea can stand to its promise. The best should win for the honor and glory of open source.

We encourage everyone interested in the creation of Python bindings for C++ libraries to test Shiboken, report problems (we now have a component on OpenBossa bugzilla!), and tell us if something is missing for your library to work. Patches are always welcome as usual. 🙂

A few days ago the project that I worked on for sometime finally went public: PySide was launched!

And “what is PySide?”, you ask me. It is a binding of the Qt4 framework for the Python language created by INdT and Nokia (Moi, tamperelaiset!) under a LGPL license. My team (not that I’m the owner, “mine” in the sense of “our not including the listener” — I think there is a plural for that in Finnish or Quenya) worked as mad and the launching was smooth: we have a positive reception from the community and the news are popping up everywhere.

And we give not only the fish but also the fishing rod: the binding generator was also made available. But what is the importance of this? Since the news was given, the explanation follows.

But before I continue, pay attention to the little Prince of Persia like bottle on the PySide logo. This nice image is a branding used in projects from the Qt Labs Americas.

The main motivation to start the PySide project was to provide Python bindings of the Qt4 library under a LGPL license, to follow the very own Qt4 LGPL license offer from Nokia. Many possibilities on how this should be done where analysed, and before this sentence start an endless technical discussion I must say that all the options have strengths and weaknesses, but aren’t that much different. In the end it was a mix of right-tool-for-the-job, team’s acquaintance with the technologies involved and personal taste. Just to mention a personal favorite, I really appreciate Smoke. In the end we choose to alter an existing binding generator (more on this later) and use Boost.Python as the middle-man to talk to CPython API. To express this with colored boxes this is PySide right now: 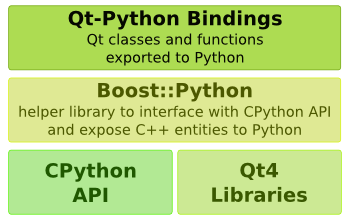 Writing bindings for a library so massively huge as Qt is a task… no, it’s not a task, it is a punishment. Beign reasonable people as we are, a previous research has been made and we opt to adapt the code from QtScript Generator,which is a fork of the Qt Jambi’s Generator, and both are binding generators for QtScript and Java, respectively. They’re developed by Trolltech (when it was called Trolltech).

The global.h file includes all headers (or at least the desired ones) from the library beign wrapped, and is also used to define (and undefine) preprocessor macros. typesystem.xml files contains descriptions of how the library should be exported to the target language and other semantic information: rejeted classes, renames methods, types to be converted, which methods move object ownership from Python to C++ and the otherway around, and specifies where handwritten code for special cases should be inserted. If there is no need for changes, this XML will be a simple list of classes, enums and functions.

Notice that we not only forked the QtScript Generator, we also converted it from an monolithic application to a library + front-end generator scheme. And here is another picture to show the idea:

Theoretically the projects from where we derived code could be changed to use the API Extractor and share this code base (and bugs, and fixes, and improvements). Nevertheless this will not be that straightforward, since we have made a number of changes to the typesystem format, from simple things like tag renaming (mostly changing “java” to “targetlang”) to more complex things that I’ll not exemplify here. Besides that, one could write front-ends that use API Extractor to generate things other than bindings: class diagrams with GraphViz, statistics, something-that-i-did-not-thought-about.

Now for the not so beauty part. In a perfect world the C++ to Python binding generator could generate bindings for any C++ library, although, in the way it is right now the generator is useful only for Qt based libraries. Shame on us! Anyhow, taking into account that our main target was to create Qt bindings and that a beta version of them was released, I suggest you forgive us. 🙂 Of course that it is in our plans to solve this and make the generator a useful tool for as many people as possible.

To much information for now! For the time beign download, test, report bugs and enjoy. And, if you’re feeling social, go to #pyside channel on FreeNode and subscribe to the mailing list. Everybody is welcome.